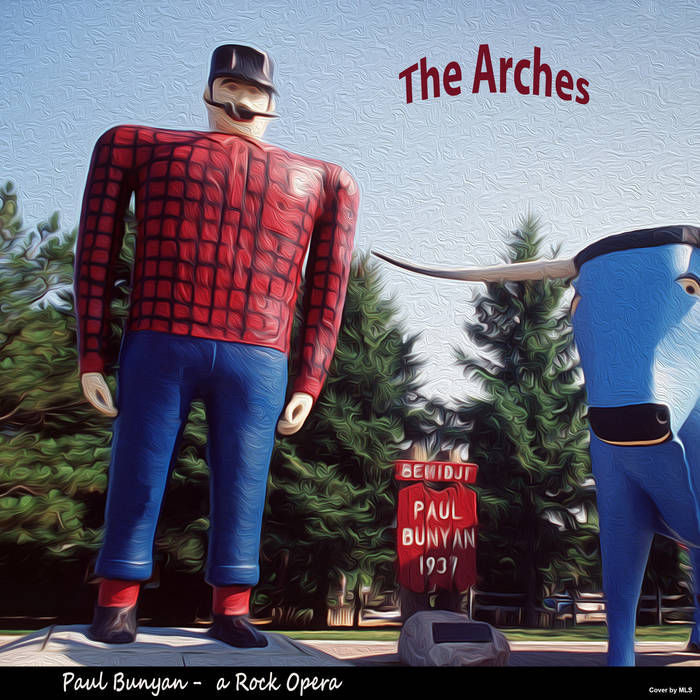 Sven B. Schreiber So the mysterious words at the end of the liner notes accompanying "Luminance" really were a cliffhanger... and the disturbing story told there fortunately turned into a "happy ever after" ending. Pheeew... but frankly, who would have seriously expected that "The Arches" - "a Minneapolis Instrumental band fighting crime and spreading love and kindness around the world" - would really lose their vision of making music?! And with "Paul Bunyan - a Rock Opera" they created the weirdest combination of guitar and mellotron I'm aware of. Well done! I just love "The Arches"... the rock music world wouldn't be the same without you. Keep on rocking! And pleeease... pretty please with sugar on top - don't stop adding your own peculiar "artsy and experimental" ideas to your songs! Favorite track: We are the Forest.

continued album narrative from Luminance album:
They pulled their equipment out of the van and watched as the VW van was towed off to a repair shop, They all wandered away from the DK Studio parking lot. The girls went across the street to a coffee shop where they could keep an eye on the equipment and get out of the heat. Murphy headed off on his own down the sidewalk feeling like this was all his fault. How could he be so selfish and stupid? How were they going to pay the repair shop? How were they getting back to Minnesota? Wanting to get out of the hot sun, Murph wandered into Corky’s Used Record Shop. He flipped through the record stacks, seeing many old albums he used to own. Wait. Not possible! It caught his eye as he flipped past it, so he flipped backwards and there it was, The Arches Paul Bunyan Rock Opera! No way! How did that get all the way out here in California?
The album was a flop of an experiment from their college days. There were only a limited amount in circulation, so what were the odds of it being here? Murphy laughed to himself how they acted out the scenes of Paul Bunyan swinging his giant axe before recording the album at their dump of a flat in Dinkytown near the University of Minnsota campus. It certainly was nothing like Leonard Bernstein’s West Side Story, but it did break some new ground at the time for combining different instruments and subject matter into a hap hazard musical of sorts.
Murph had an idea! He ran out of the record store with album under his arm looking for the others. He almost ran by them when he looked in the window at the Urban Mud Coffee shop, and saw Nina, Jessica and Nova sharing an ice coffee. When he ran into the coffee shop holding the album above his head, they couldn’t believe it. Jaws dropped and What the Effs were lip mimed as they all started laughing. They had forgotten that what brought them together was the love of creating and playing music together. Why was it now breaking them apart? They were more important to each other than the music. So, an epic journey, an epiphany and an admission of stupidity, made them all realize that all they ever needed was each other. This whole trip was a lesson in pride, avarice and purpose. It finally produced a re-awaking as to what was important. They didn’t need to come to California to prove anything. Maybe this was just what they needed to get back to the basics of The Arches. They borrowed a mellotron from Play it Again Music on Sunset Blvd and set up in the DK Studio parking lot and began playing (very loud) their re-creation of Paul Bunyan – a Rock Opera.
Enjoy!